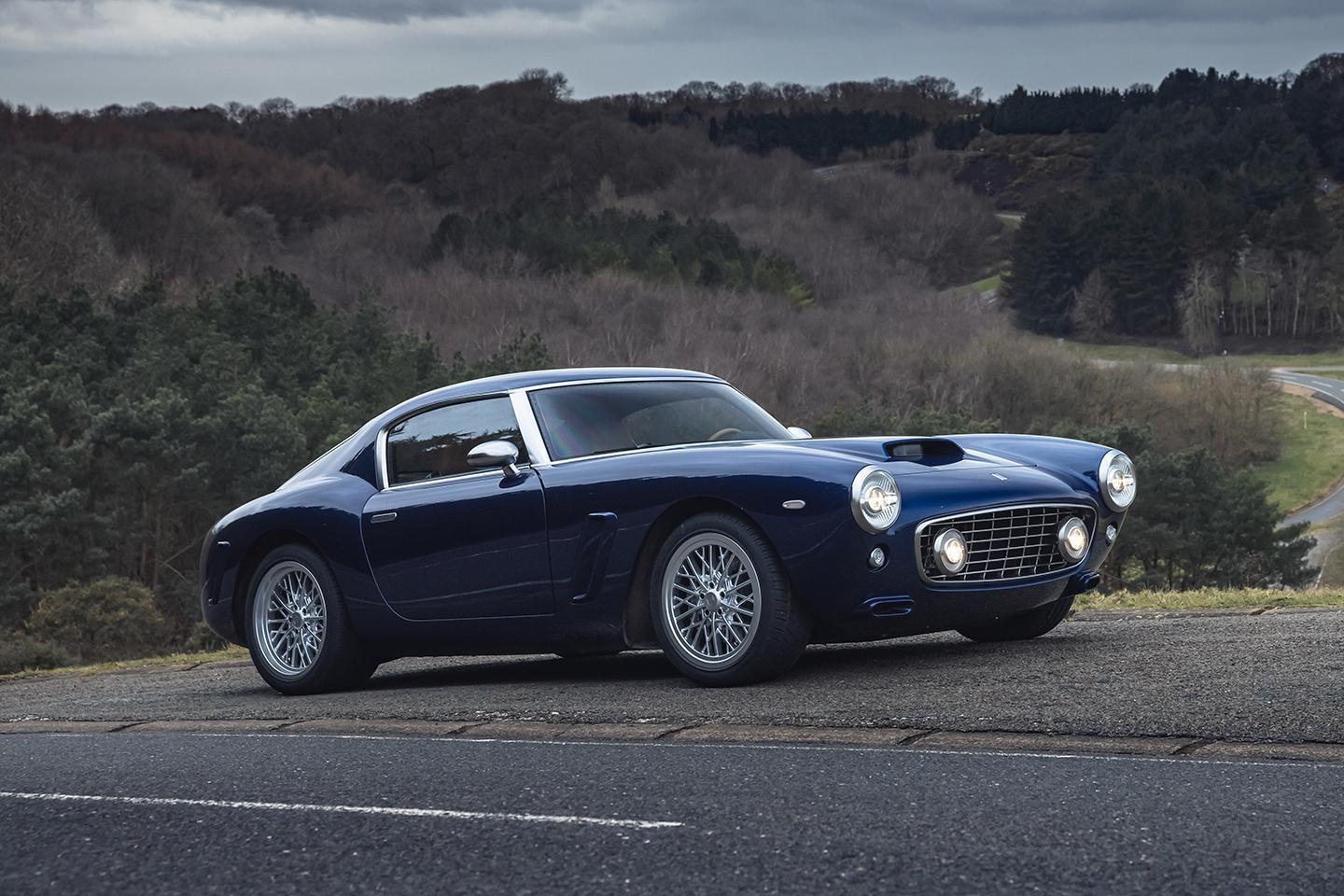 You probably know Ray Mallock Limited for its motorsport exploits. You hear RML and picture the Nissan racers, from the Group C R90 to BTCC Primeras, or maybe the Aston Le Mans cars of the 80s, or the Chevrolet Lacettis that were so successful in both BTCC and WTCC. RML has decades of experience in racing, but motorsport only accounts for about 15 per cent of its work these days. The rest is spent helping OEMs behind the scenes, where its expertise is on show – but its name is not.

Enter, then, the RML Short Wheelbase, the vision of Michael Mallock – Ray’s son, and now the firm’s CEO. This is the car intended to show off everything that RML is now capable of, and without the need to compromise the project so it fits the requirements of a larger car maker.

Which is why the SWB looks how it does, too. Originally RML Project 35 was going to be a hypercar (yes, really), but something chasing maximum downforce and an impressive v-max was not ultimately the machine they wanted to make. There are plenty to those out there already. The desire instead was to create something beautiful, enjoyable at road speed and obviously mechanical in an increasingly anodyne automotive world. Inspiration for that sort of car couldn’t come from any other decade than the 1960s. 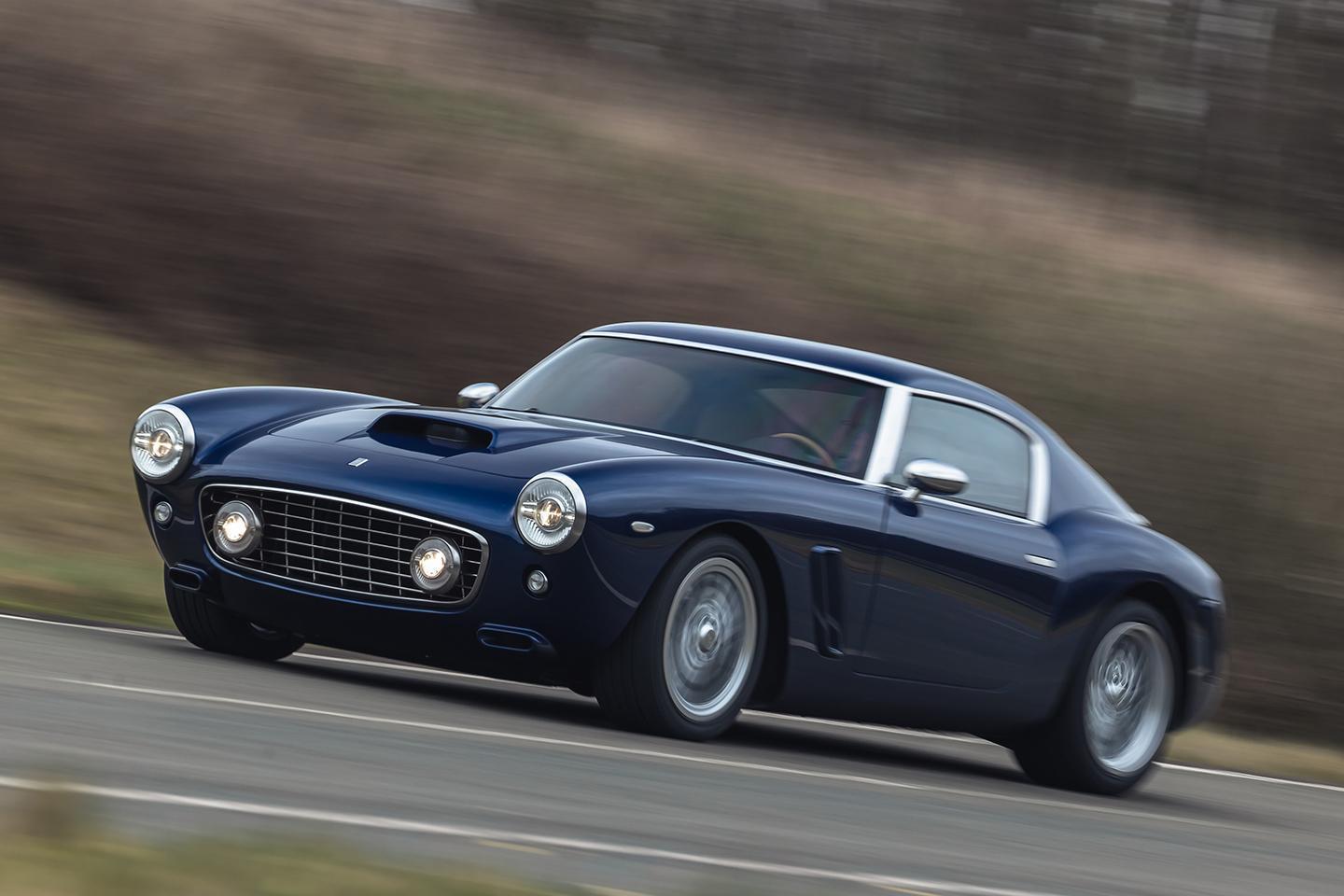 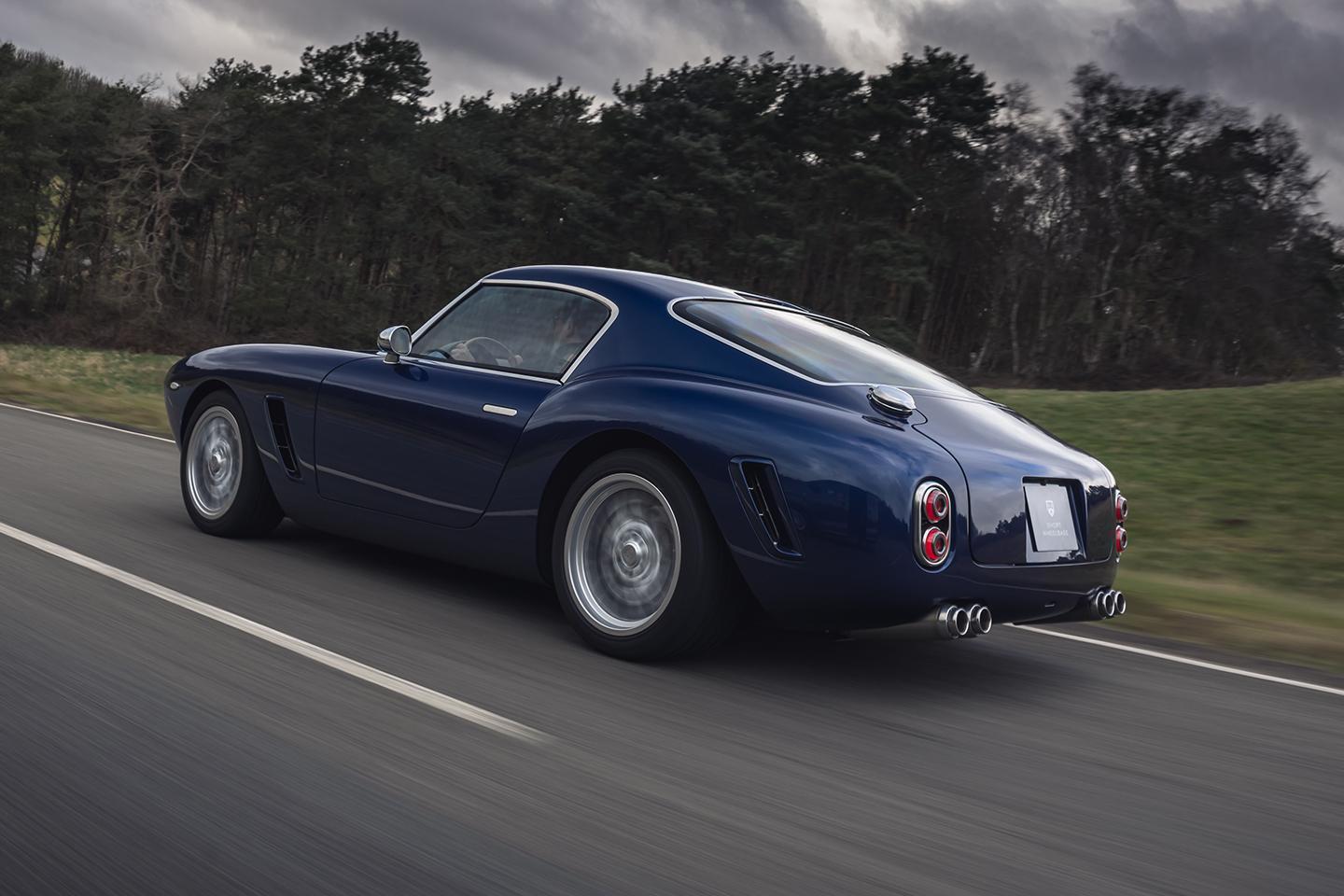 Of course, the cruel irony for this project is that celebrating half-century-old V12 Ferraris is quite popular at the moment. But the ambition for the RML is different to what GTO Engineering is aiming at; more road focused and without the 10,000rpm engine. And a choice of fastidiously built V12 sports cars doesn’t sound the worst situation in the world. You’ll have your own view on the styling inspiration, and a few sentences on the internet won’t change that. However, what can be said now with some conviction is that the SWB looks distinct, and that wasn’t always clear in the pics.

It’s lower, wider and meaner than an original, made to look more modern with bespoke lights and bigger wheels – but still classically handsome. Needless to say, it doesn’t look like some awkwardly rebodied 550; not that that should ever have been a concern. To these eyes, it’s great – compact and cohesive, and definitely no pastiche. Like the cars made by Singer Vehicle Design (they had to come up at some point) the inspiration is clear, but there is a design identity of its own, too. The three months spent in a studio were plainly worth the investment; it just needed a garage at Millbrook to make that clear.

Chassis Zero is based in Bedfordshire at the moment for months of durability testing; building a 30-unit road car run is a different challenge to a touring car, but the standards are no less exacting. So it’s going to be tortured for many more weeks yet, ironing out imperfections before it’s certified for road use and the customer builds can begin. Far better to find issues now than three months after delivery, of course. You don’t get a reputation like RML’s building stuff that’s just good enough. 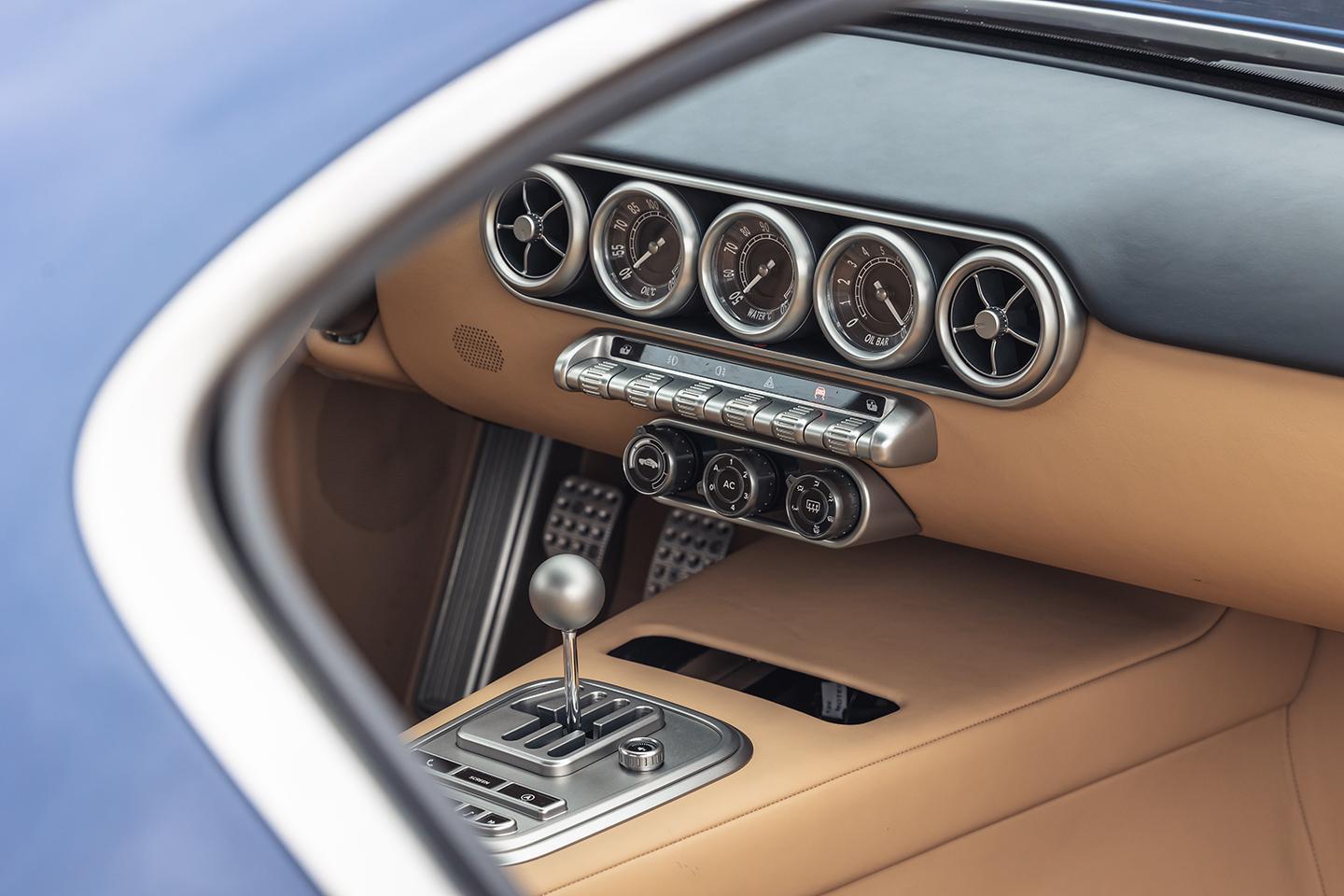 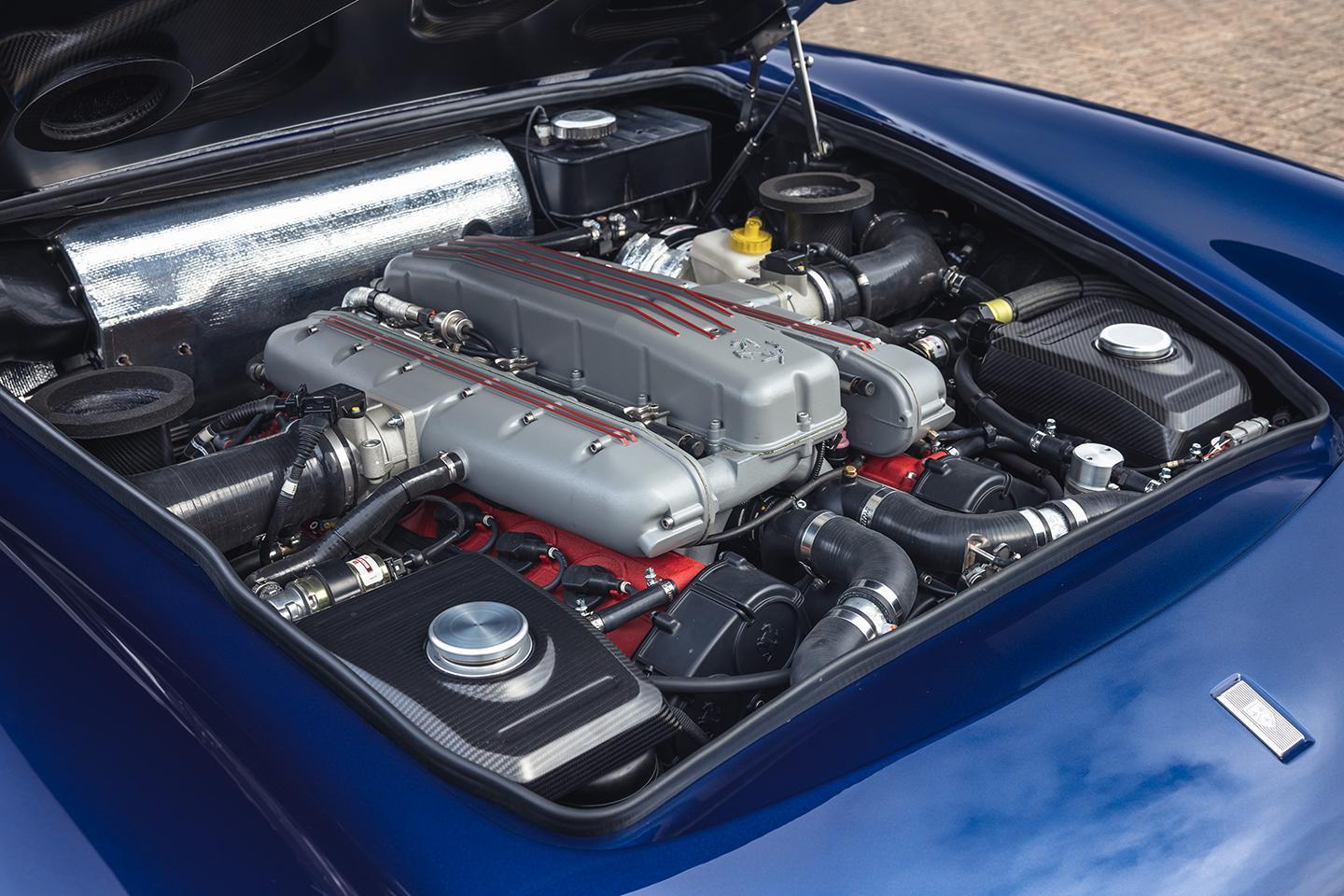 Before we go any further, we should discuss the donor car, even if that billing sells what’s been done very short. “A new car with carryover components” is how it’s described by Mallock, with essentially as little as possible kept from the original Ferrari 550 to keep it serviceable and suitable for reimport into its home market. (Around 70 per cent of cars are expected to reside outside of the UK, with half of those in Europe and half in the US.) Every Maranello that will become an SWB has its engine and gearbox stripped and rebuilt to factory standard; if there’s something that can’t be reconditioned, it’s replaced. The engine is blueprinted and dynoed, any foibles addressed, before going into the car. The unique cooling system devised for the front of the SWB – much smaller than the standard unit because of there being much less space – speaks to the attention to detail here. The V12 sits in its bay like it was made to made to be there, snugly but near-perfectly.

What an engine it is, too. RML tested the Ferrari V12 icons from 456 to F12 when deciding on which car to build the Short Wheelbase from; with a 599 deemed a tad too wild (and lacking a manual gearbox) and a 456 presumably a little demure for seven-figure sports car, the 550 was seen as the best compromise in terms of power, torque, usability and durability. All were manual, and a decent production run of 3,000 means a reasonable supply. Keeping the powertrain standard helps with servicing later in life, too, because the oily bits remain as they were – albeit rebuilt to as-new standard.

As a smaller, lighter car than a 550 Maranello, the SWB feels potent from the off. The old 5.5-litre doesn’t have the feral edge of later Ferrari V12s, but it’s blessed with a huge vat of torque, more than ample power (485hp means 0-62mph in 4.1 seconds) and a sweet, smooth soundtrack that no amount of modern fakery could ever replicate. RML says the eventual sound might be quieter, but it’s easy to imagine many customers opting for the classy, cultured timbre of the V12 to be kept a little louder than is strictly necessary. The SWB feels fast even when going slow, if that makes sense, because you’re never more than a toe extension away from a huge stride forward. I don’t know where the rev limiter is, but the sound is sublime at somewhere near it. 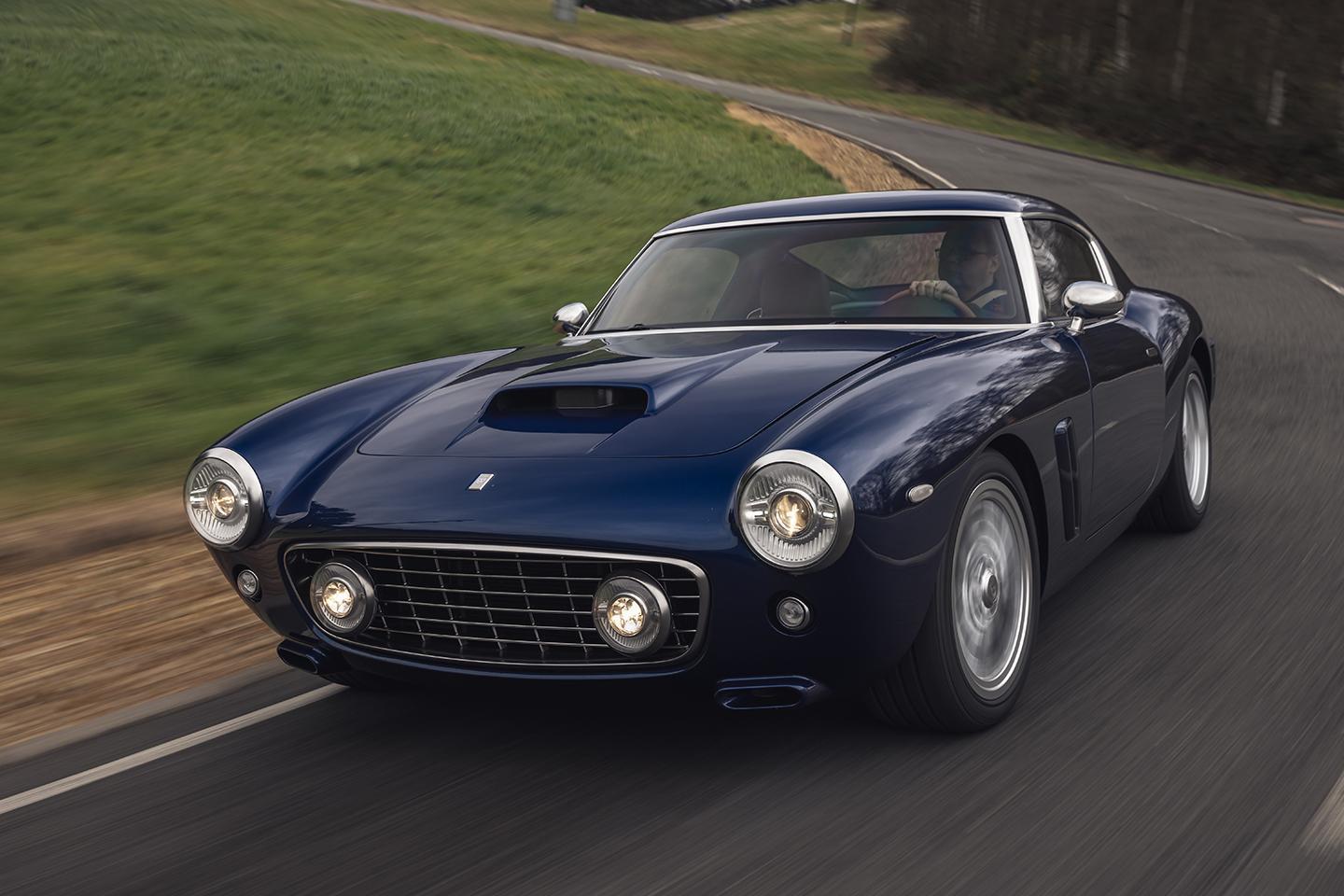 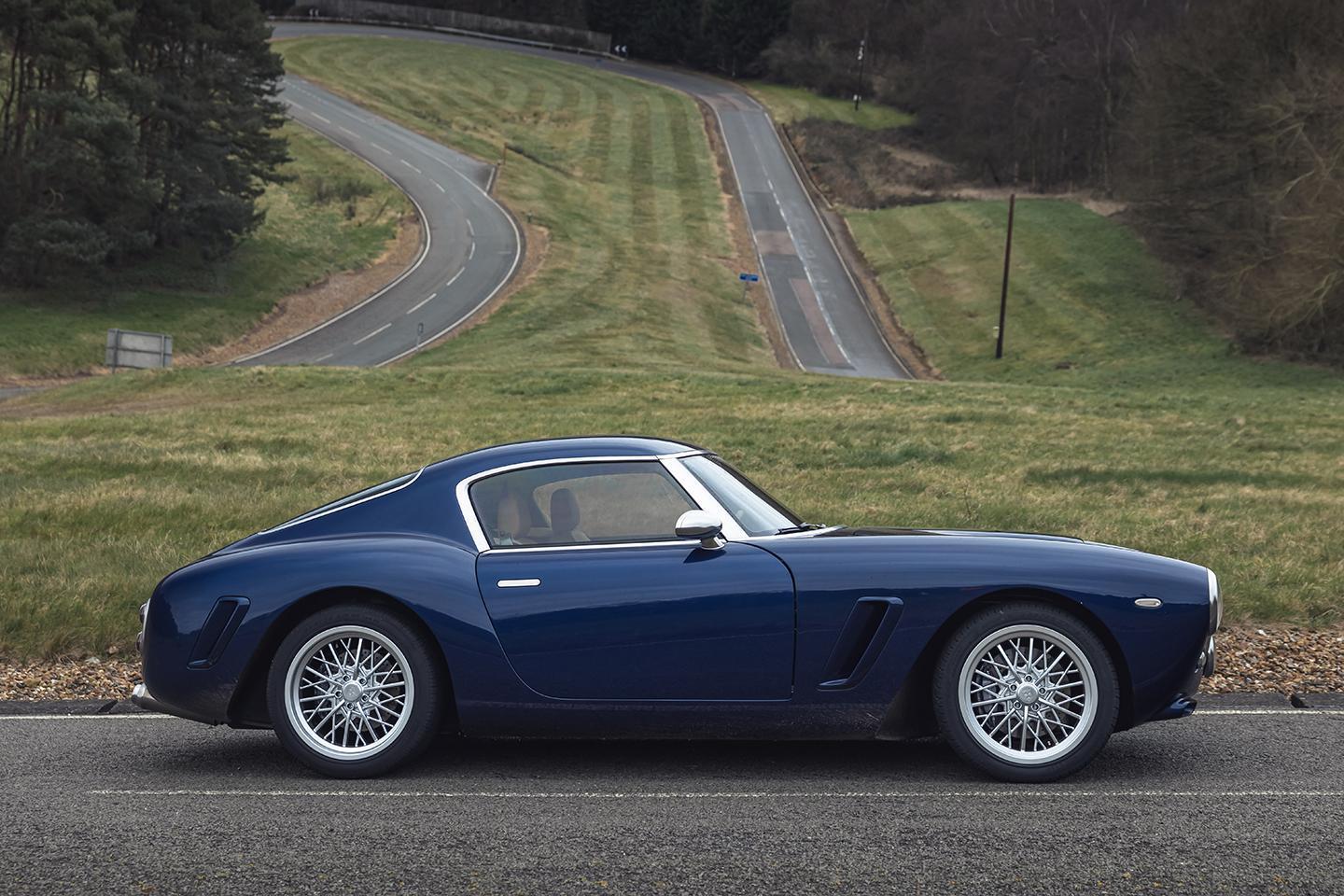 And the manual is a joy, of course. Mallock’s assertion that it would be a bit stiff as it’s still bedding in bears true, but it’s only going into second that’s ever a bit tricky, and that improves with temperature. Otherwise, it brings all the supercar nostalgia you might hope for, requiring effort and giving reward, making you think about the drive and mandating your involvement. You’ll be glad of it. Anyone thinking about an SWB will have all manner of paddleshift supercars; this is an alternative experience done very well.

Dynamically, the SWB is initially a little unsettling, if only because of the juxtaposition. You’ve approached what looks like an old car, but sat in one that feels quite modern (the dimensions have been built around Mallock wearing a helmet, and he’s six foot four). A push button start has fired a V12 that doesn’t feel brand new, but doesn’t have the truculent nature of an old engine, either. There’s three pedals and a manual gearbox, but really punchy performance. And then, directing a large, thin, airbag-less wheel, surrounded by leather and metal (the only plastic bits are the seatbelts), the SWB delivers a driving experience that confounds preconceptions.

No, it’s not like a new Ferrari, flitting this way and that; nor was this a flat-out test, because nobody wants to wreck a unique prototype. But there was ample time to discover that the SWB does what the best restomods – or whatever best describes this car – always do. It combines the greatest bits of driving old cars with the greatest bits of new ones. So every input requires some effort and consideration, but there’s also poise and precision to the drive that often eludes older cars. There’s some 550 Maranello in here, of course, but given that car’s reputation it’s hardly a bad place to start. Added to that are new springs and anti-roll bars, plus Ohlins dampers, with the carbon composite body (an upside-down tub, as RML puts it) adding stiffness and reducing weight over standard. 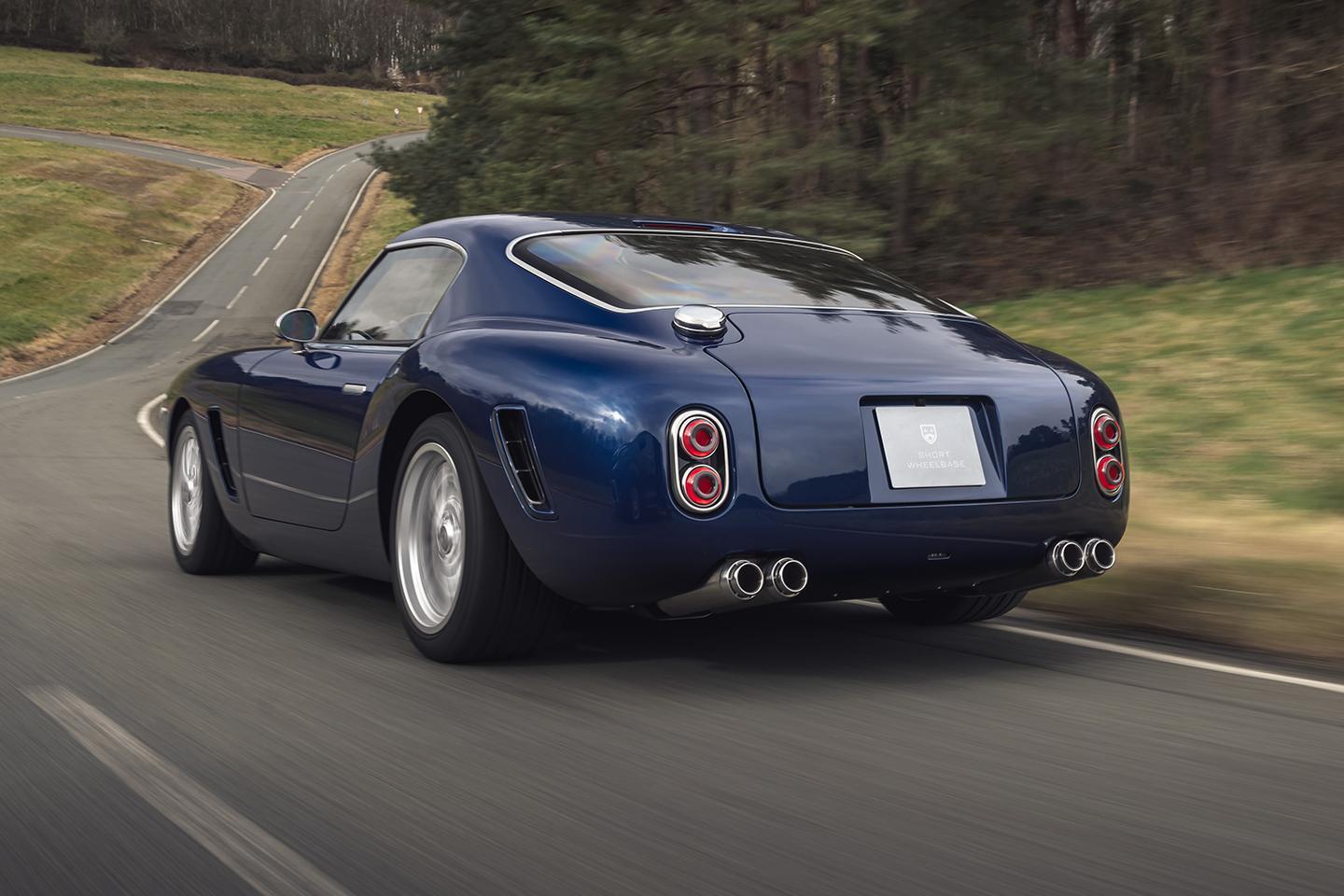 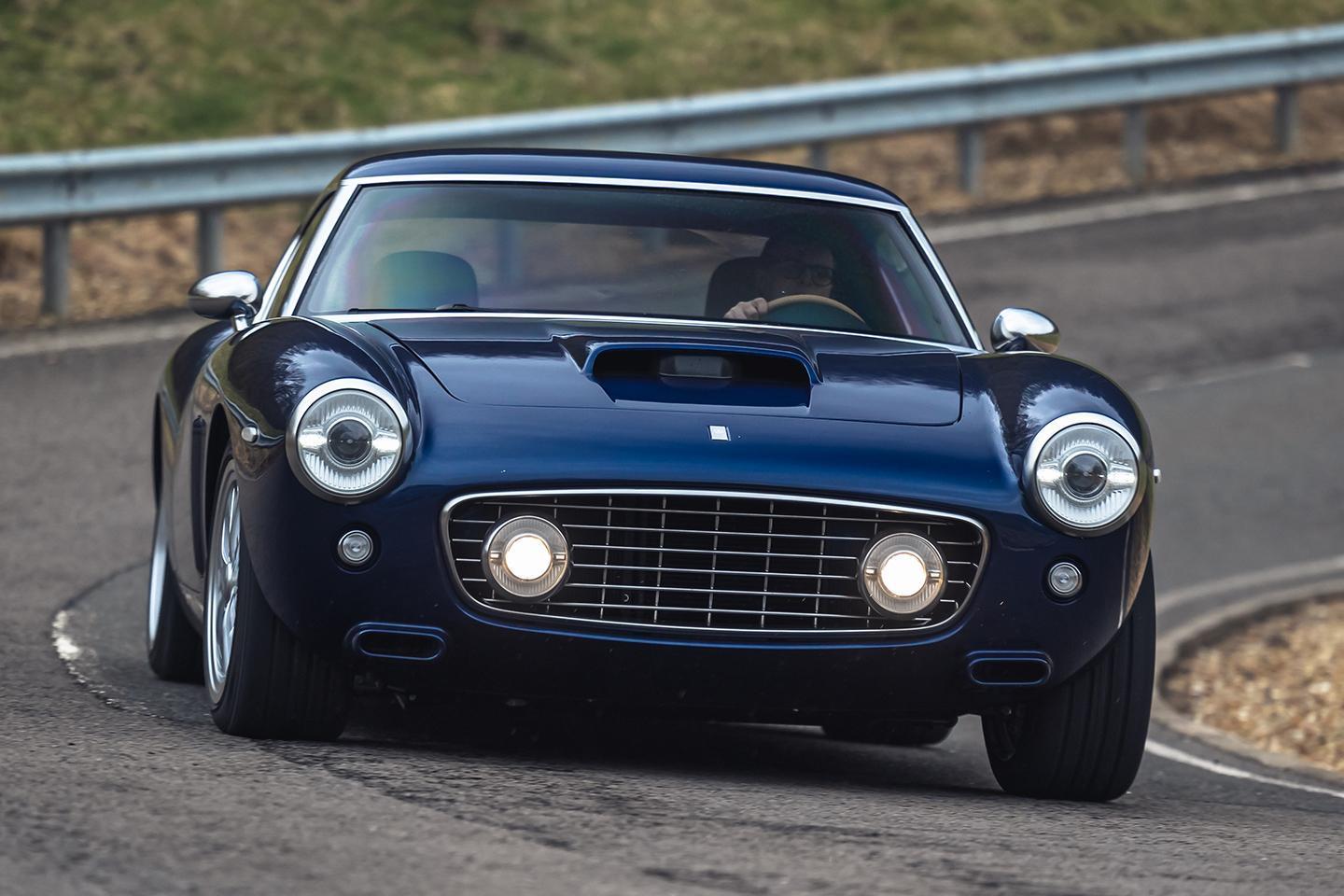 So there’s balance, because the 550 was always famed for that, and composure, too – but also joy in the experience of not going very fast because the steering isn’t the quickest, the noise is always there, and the gearbox needs thinking about. But none of those elements are overwhelmingly hard work, as they can be in straight-up classics. There’s still some work to do; the guys say they might reduce assistance further in the steering (this tune seemed good, but more weight might play to the aesthetic better) and the rear did scrape on a nasty compression. Sorting that is obviously on the to-do list. Fundamentally it feels good, though, and a joy to drive around the hill route. Which is the point of the SWB; something to enjoy on a B-road rather than set lap times with.

Crucially, moreover, this RML car feels like its own thing. Which, given the inspiration and the foundations, is probably its most notable achievement thus far. It’s too fast and too capable (as well as too spacious) to feel like an old car, yet sufficiently emotive and enthralling to resemble the majority of new stuff. Even in its prototype stage complete with data-logging dash, the interior shows great promise, with a bespoke feel thanks to new parts and 21st century technology subtly incorporated.

Yes, it’s going to be a lot of money. But if the potential in combining one of the great Ferraris of the late 20th century with motorsport know-how and an iconic look wasn’t there beforehand, a drive has confirmed it. Maybe it’s not what everyone would do with a Ferrari 550 Maranello, but there’s more than likely going to be 30 RML customers far too chuffed to care. The chance to drive it as a fully-fledged road car can’t come soon enough.